It’s always exciting to be back with some great updates for you in our releases! In this release v 1.4.4, we have added several features

By now you have heard about Kanban and you think that it is applicable to your work – Being simple to implement and being very visual are attributes of Kanban that make it easy to adopt and use. And we all like the fact that Kanban makes a team self-directing – so the team takes responsibility on itself for timely deliverables, quality and overall communication. But how does Kanban enable teams to make this magical transformation from finger pointing to self-directing, right in front of our eyes?

The term Lean Software Development was first coined as the title for a conference organized by the ESPRIT initiative of the European Union, in Stuttgart Germany, October 1992. Independently, the following year, Robert “Bob” Charette in 1993 suggested the concept of “Lean Software Development” as part of his work exploring better ways of managing risk in software projects. The term “Lean” dates to 1991, suggested by James Womack, Daniel Jones, and Daniel Roos, in their book The Machine That Changed the World.

Lean Kanban University accredited Kanban training program there has been some commentary questioning whether I and LKU have the right to assert ourselves with such authority. These issues are worth addressing. The questioners suggest whether I invented Kanban or own it and if not then what gives LKU legitimacy to trade as we intend to do, offering standardized accredited training delivered by accredited trainers? While these questions are coming from outside the community and it would be easy to dismiss them as coming from disgruntled people with an axe to grind or sour grapes to squash, I believe the questions are worth addressing.

Software development using Kanban principles has not focused on Effort Tracking (though there hasn’t been a strong position against the same). At Digité, we were practitioners of Iterative Software Development. As part of this process, we emphasized on Daily Effort Tracking (time filing) for several reasons: A) Since we have geographically distributed teams, it helped us get a sense of what happened without chasing individual team members or asking people to send an email with their update. B) A lot of effort based metrics could be accurately computed and relied upon (especially if you have come from the ISO/CMMI world!). 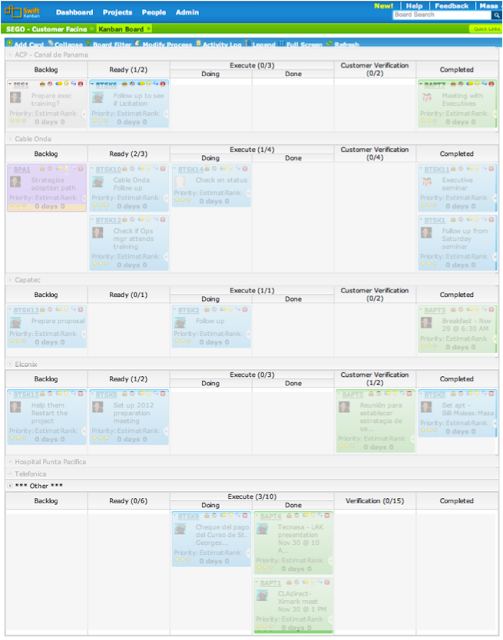 It is untrue that Kanban is only good for software change management work. Many people new to Kanban have this misconception mainly for two reasons. One is because Kanban started in a change management team at Microsoft. The other one is because David J Anderson declared that Kanban is a method for change management in the organization and that statement can be misinterpreted. What David meant with that is Kanban helps you bring positive change to your organization. Although the original Kanban description is around software it is actually context free.

Digite Announces Free Use of SwiftKanban for Non-Profits

Kanban and the Focus on Fundamentals

Our Kanban journey began early in 2010 when we decided that we would build a product in the Kanban space that would address some of the basic issues we saw our prospects face in adoption of Agile methods such as Scrum and XP within their organizations that were historically used to doing waterfall or iterative or some hybrid Agile method that combined more than one type of processes. While the presence of established competitors was a strong reason to look beyond the ‘popular’ Agile methods, we also felt a strong appeal for Kanban existed because of its focus on 3 key fundamentals.

Visualize your workflow and manage your work in an Easy and Intuitive way.

Free Trial
Hey there! Thanks for visiting Digité.